Classical Indian dance and yoga are two systems of spiritually based movement practices that can offer different ways of experiencing embodiment.

Having trained in classical Indian dance (Bharata Natyam) in the US for over 15 years, I remember when I entered my first US-based hatha yoga class, my body inherently knew the postures of yoga—through my body’s memory of Bharata Natyam. My curiosity was sparked to learn more about yoga, eventually leading me to become a yoga therapist.

The most striking distinction of the two practices for me has been that dance (I will be referring to Bharata Natyam when referring to dance) allows me to experience union with my being through immersion with art, and sharing this experience with an audience. The beauty of artistic expression is the focus that cultivates a state of transcendence.

Yoga (I will be referring primarily to hatha yoga) offers a way for me to experience union with my being through introspection.  The practices help unveil layers of myself, leading to deepened awareness and a state of spiritual union.

I have personally found that the two traditions offer me slightly different ways of aligning body and being, and it has made me appreciate the particularities of each tradition.  Some personal reflections on commonalities and differences I have experienced are articulated below.

Hindu mythology is intertwined in both yoga and dance. Dancers are storytellers of mythology, and the mythology inspires names, themes, and practices in yoga. I learned about Hinduism primarily through dance, as it was required to understand the myths in order to express these stories to an audience.

My favorite dances were those conveying the stories of Lord Shiva, who is integral to both yoga and dance.
As Nataraja, the Lord of Dance, Shiva performs both Lasya (a soft dance representing the creation of the world), and Tandava (an energetic dance representing the destruction of the world).  Lasya and Tandava are also understood as feminine and masculine energies, which can be compared to the sun (ha) and moon (tha) energies in hatha yoga.

As Yogiraj (the great yogi) or Adiyogi (the first yogi), Shiva is absorbed in a transcendental state as a supreme guru of yoga.  He is said to have transmitted seven aspects of yoga into seven sages known as the Saptarishis, who distributed this knowledge to different parts of the world. Yoga is said to have maintained these seven forms today.  Patanajali, the author of the Yoga Sutras (circa 200 c.e., an authoritative text on yoga) was also said to have been inspired by a divine encounter with Shiva.

Yoga and dance are both traditionally taught within a guru-shishya tradition (mentorship between a guru and disciple). Students are initiated into the relationship, and the educational process is considered sacred.  The formal study of both yoga and dance each requires commitment and dedication for many years (if not a lifetime).

A primary purpose of dance is to evoke rasa, which is defined in the Natya Shastra (circa 200 c.e., an authoritative text on performing arts attributed to Bharata Muni) as a “flavor,” “essence,” or a “transcendent and blissful aesthetic experience,” as cited by Roxanne Kamayani Gupta, PhD in her book, A Yoga of Indian Dance.  Dr. Gupta compares rasa to samadhi in yoga, which she defines as the culminating state of “total absorption.” As Dr. Gupta puts it, both disciplines integrate “inner, subjective experience with outer, objective form,” operating on “the physical, psychic, and spiritual” levels simultaneously.

While yoga lays a pathway to union through introspection, dance lays a pathway to union not only through the dancer’s experience of the art, but also her opening of this experience for the audience members. This dual experience of transcendence (first for the dancer and second for the audience) is known as a “double blessing,” according to my dance teacher, Guru Anuradha Naimpally, an expert practitioner of Bharata Natyam.

Alignment of the Body

Yoga and dance are both longstanding traditions with multiple historical influences that have contributed to the development of each form over time.  Yoga was initially familiar to my body as a dancer because there are similarities in the physical forms of yoga and dance. In both traditions, the movements or postures are based on the center line of the body in relation to gravity, both traditions keep the head, neck and spine straight and balanced, they are both grounding and stabilizing, and simultaneously necessitate and cultivate a deep presence and stillness in concentration.

The alignment and form in asana practice is intended to “cultivate awareness, relaxation, concentration and meditation,” as explained by Swami Satyananda Saraswati of the Bihar School of Yoga in Asana, Pranayama, Mudra, Bandhai. He cites that yoga scriptures identified 8,400,000 asanas (translated from Sanskrit as “seat,” known today as physical postures), that have now been reduced to a few hundred.  He identifies that asana practice can strengthen the body, teach humans to live in harmony with nature, activate energetic centers that help evolve human consciousness, and release obstacles to integrating mind and body.

In dance, the alignment and form of the body are designed to evoke rasa in the audience, or simply for aesthetic purposes. The dancer attunes her body to the rhythym or melody of the song, to the poetry, to the emotion that is to be expressed in order to evoke rasa, or simply for the beauty of the art.

The Natya Shastra outlines 108 karanas (translated from Sanskrit as “action” or “doing”), which are cadences of movements that can be seen in present day dance as “rhythmic and graceful without interpretative significance,” in the words of Aparna Ramaswamy, PhD, author of Bharatha Natya Yoga: Understanding Bharata Natyam as an Embodiment of Ashta Anga Yoga.  The karanas are depicted in sculptures and paintings on the walls of Hindu temples in India, and include acrobatic stances that are similar to yoga asanas, the majority of which are not routinely used in current day dance because of the requirement of flexibility needed to do these movements. An example of a parallel movement found in yoga and dance is pictured below.

Swami Satyananda Saraswati of the Bihar School of Yoga writes in Asana, Pranayama, Mudra, Bandha that mudras are considered “higher practices which lead to awakening.” This text outlines five groups of mudras in yoga, including hand mudras, head mudras, postural mudras, lock mudras, and perineal mudras.  Mudra practice establishes a connection between the physical, mental, and energy bodies, and can lead to energy being directed within the body for healing purposes. They can be used in conjunction with physical postures, breathwork, chanting and meditation.

In dance there are 28 single–handed gestures (Asamyukta Hasta), and 24 double handed gestures (Samyukta Hasta) identified in the Natya Shastra.  In the book Mudras of India, Cain and Revital Carroll describe mudras as part of an “artistic language of poetry, gesture, and dance” which convey self-expression through creative storytelling.  Mudras, along with a dancer’s facial expression and body posture, helps to communicate with the audience to elicit rasa, and they can also simply be part of an aesthetic movement without an expressive purpose.

In my personal experience I had been introduced to mudras through dance, and I was struck by the notion that mudras could be a powerful way to channel energy to myself, as opposed to being a method of communication with an audience. Mudras are now among my favorite part of my own yoga practice because they can be private (done quietly in your lap as a meditative practice) or public (used to communicate with others).  They represent an intersection of yoga and dance for me as they are both artistic and intentionally healing at the same time.

After years of practicing grounding, stabilizing my breath, finding structural alignment, and stilling my mind to increase concentration—all techniques I learned as a dancer—yoga practice felt like home to me.

Once these basic techniques became second nature, the fun of dance became to experience my being dancing through my body and my energy moving outwardly through space, embodying the beauty of the art, and becoming a conduit of this beauty expressed to others.

In yoga my being also dances through my body, but rather than sensing my energy moving through space in an outward fashion, I become aware of my energy moving inward.  I become both the dancer and the audience, simultaneously creating and witnessing energetic play within me.

Geeti Shirazi Mahajan, a Psychotherapist (Licensed Clinical Social Worker) and Certified Yoga Therapist (C-IAYT), offers culturally-affirming psychotherapy and yoga therapy for diverse populations in Austin, Texas in the US. Her ability to create a nurturing, healing space empowers students to connect with their deepest wisdom to live the lives they envision. A trained Classical Indian Dancer, Geeti infuses her yoga classes with the music and aesthetics of Indian dance, creating a dancing flow that draws from postures inherent to both yoga and dance. Geeti has over 6 years of experience offering therapeutic yoga classes in mental health settings, including inpatient psychiatric hospitals, outpatient mental health clinics, and in private practice. Learn more about Geeti at geetishirazimahajan.com. 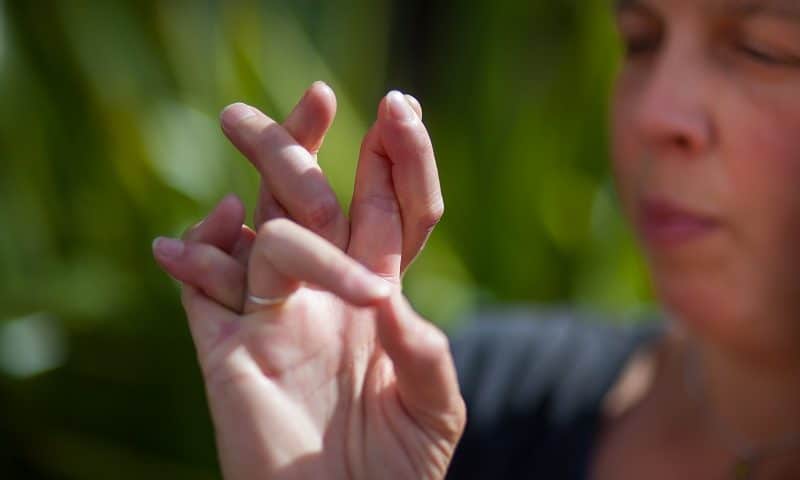 Mudra: Yoga in your Hands

Take a look at your hands. Did you know they could do yoga? No, not just supporting you in Downward Dog, or flailing about in Tree […]