Did you know that Yoga and Thai Massages have a lot in common?

Yoga means the unity of body, mind and spirit and if practiced well, a Thai Massage can have the very same effect.
A traditional Thai Massage could be seen as a private and passive Yoga session, where the massagist frees the blocked energy lines of the receiver, to let the Prana/ Energy flow.

Through pressure performed by the massagist with thumbs and palms of the hands on the energetic lines that run through the receivers body, muscular tensions are released.

As well as in a Yoga practice, during a Thai Massage the breathing rhythm is very important and can help both, the receiver and the massagist to get into a meditative state of mind during the massage. This is helpful to reach a deeper more profound healing and flow of energy.

The benefits of Thai Massages relate to those from Yoga, to mention just a few to give an example: Stress and anxiety reduction, the enhancement of Prana/ Energy flow, the mobilisation of joints and muscles and the increase of flexibilty in the body. Even yoga proves to have multiple benefits for cancer patients

Some massagists and Yogis even say that Thai Massages and Yoga are the very same thing and that the only difference is that instead of an active executed yoga practice, you receive the massage passively. But that the result is the same: A holistic harmony of body, mind and spirit and energetic balance during and after a massage as well as during and after their Yoga practice.

Whether you give or receive a Thai Massage, you wear comfortable clothes because you need to adapt to the movements and stretches, the perfect massage salon or area has a low massage mattress or futon on the floor where both, the practitioner and receiver have space to lie and sit on comfortably.

The massage usually starts with greeting and an introduction followed by questions about the health state of the receiver, to make sure that no one gets harmed or uncomfortable. The actual massage starts with a short mental preparation – kind of meditation, to center and prepare both, the massagist and receiver for the actual massage.

In a Yoga class you usually start with a small meditation or breathing exercise with the intention to focus on yourself, on now and to prepare your body and mind for the practice. Especially in this modern world, where you go to yoga after a stressful day of work or before, those minutes are important to start the practice mindful and calm and give yourself time to focus on the class and not what will happen after or before.

The Thai massage, as already mentioned also starts with a short mental and meditation-like preparation which is important for the very same reasons.

After this short preparation, the massagist first starts warming up the clients body with thumbing and palming the traditional Zen-lines and points to let the prana flow freely. When the body is warmed up by the palming and thumbing, both will be combined with carefully stretching the receivers body.

This relates to a regular Yoga class as well, first a small warm up – for example a few rounds of Sun Salutation and then some Asanas that stretch or strengthen the body.

The structure of both, a Yoga class and a Massage do have a lot in common, as you can see and it doesn´t end there, because what would a good Yoga class be without a good relaxation in the end? At the end of the Thai Massage, the receiver has a few minutes time to relax and let the effects of the massage sink in.

Another similarity that Yoga and Thai Massage share is that the breathing rythem is important and guides you through the practice or / and the massage.

For Yoga the breathing is a tool used to concentrate, focus, meditate and to get into deeper stretching or more profound performance of the asana.

<ñp>While during a massage the breathing rythm is important for the very same reasons, with the difference that in the ideal case the receiver and the massagist adapt their breathing to one another(more or less unconsciously) and to the movements. The thumbing and palming of the hands executed with the right breathing technique can put both in a meditational state of mind.

How about combining the two sources?

The Yoga practice can profit from the benefits of the massage and vice versa, although none of them can replace the other one.
Thai Massage profits from Yoga practice, because its an active way to move the body and includes Meditation and Pranayama to balance body, mind and spirit. That helps to enter into a relaxing and meditative state while giving and receiving a massage.

Yoga profits from Thai Massages and it´s a passive way to unblock the energy lines, let the Prana flow and get rid of muscular tensions which can occur after a strong Yoga class.

Yoga and Thai Massages complement very good, therefore its very useful to combine them and profit from one another.

Hello, my name is Anina and I‘m a passionate Yoga teacher of a style that I mix depending on the level and daily mood of my students. I learned in the International Integral Yoga school in Lisbon/ Portugal and the beginners base for my students is Integral Hatha Yoga mixed up with my favourite styles Dynamic Vinyasa and Ashtanga Yoga. I focus on adapting Yoga for every student and not the other way around, thats why I participated 2016 in a Yoga Therapy workshop in Huelva, Spain. 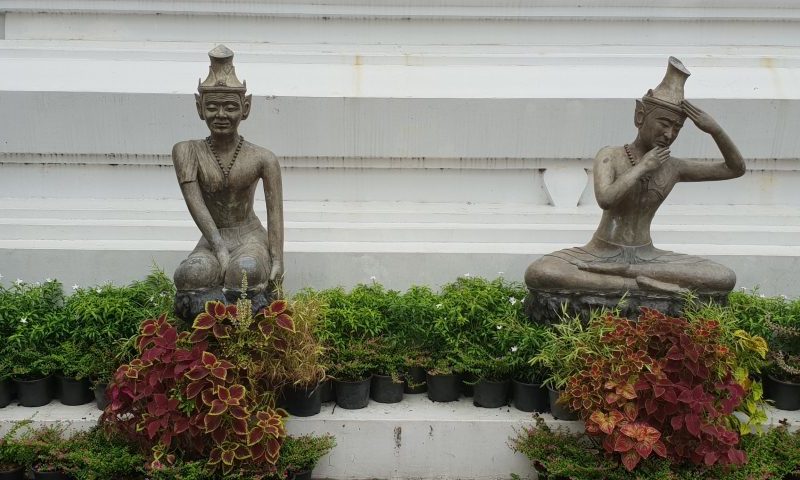 What is Reusi Dat Ton? The Thai self-massage