The history of sound healing and music therapy - Lucia Yoga

The history of sound healing and music therapy 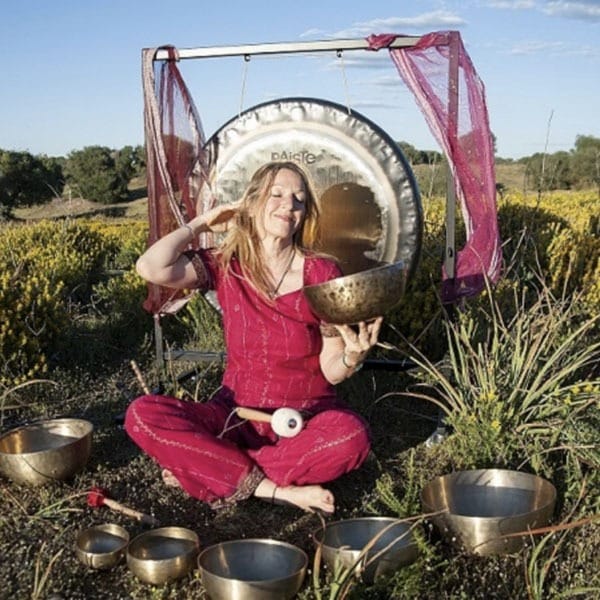 Sound healing - a journey to your inner self

There are many theories how sound healing evolved and it is difficult to put an exact time and place to when and where it originated from. Instruments like gongs, drums, didgeridoos, monochords and singing bowls are all considered to be archaic instruments, stemming from early human history. They probably came into existence at the same time as modern humans – the evolution of music and Homo sapiens cannot be separated from each other. Archaic instruments are usually defined as those producing sounds or tones rather than melodies.

“These sounds have the ability/capacity to, by circumventing our rational consciousness, enter into deeper levels of our physical bodies, but also into our psyche,” writes Dr Otto-Heinrich Silber in his book Klangtherapie! (Sound Therapy). “If we are ready to receive these sounds, to open ourselves to them and allow them to enter deeply, they unfold their properties as an ur-structure, an archetype reaching to the subliminal, to the primordial substance in us,” he explains.

This knowledge was understood by many ancient cultures and used in various ways. In the countries of the Middle East, from the cities of Edirne in western Turkey to Damascus and Cairo, the so called dar al shiffa existed, meaning ‘house of health’ or ‘house of cure’. The historic approach to healing was indeed holistic and one of the methods for healing being music. Unfortunately, these places of ‘cures’ were discarded or lost over the centuries. However, one such place still exists in part and was converted into one of the most fascinating museums I have ever visited. The dar al shiffa in Edirne opened its doors to patients as early as 1488 (others existed already earlier since 1100 and applied music therapy). The hospital had its own stage where on certain days of the week musicians would play specific instruments, sounds and rhythms for patients with various ailments. Centuries of research into music therapy, undertaken before and after this time, were put to paper and applied widely (see photo with sound prescriptions).

Combined with the music stage was also a water fountain. It was well understood that the calming sound of the water would relieve and relax patients and, while designing and building the hospital complex during the period 1484-1488, special attention was made to the acoustics. It is a shame today that perhaps only the most progressive and elaborate projects would receive such attention from an architect. The adoption of modern technology nowadays is often deemed a sufficient substitute for the vernacular.

In a period when the mentally ill were burned across Europe, in Edirne music, sound and smell (yes! they used aromatherapy too!) were used in the treatment of both mental and physical illness.

Sound healing and how the gong found me

Over time, many of these holistic healing approaches have been lost and we have become a ‘modern’ society of the Industrial Age, relying mostly on pharmaceutical medicine to treat our ailments. Over the past few decades though, there has been a renaissance of some of these forgotten healing practices. Sound healing or music therapy is one of them.

In 2013, I went to a dance retreat in Turkey and one of the other participants brought along a large gong and offered us ‘gong baths’ in the evenings after long days of dancing. When I listened the first time to these powerful sounds that were so rich in harmonics, I felt my body levitating and gently, blissfully hovering above the ground, as if I floated on a bed of sound. And I felt touched very deep inside. Somewhere so profound, that I didn’t know that this place had even existed and of what it actually consisted of. I only knew I wanted to be touched there again and again. And I planted this seed in the Universe. As soon as you plant a seed, the Universe will conspire to let it grow and come into existence.

I got the chance to train in singing bowls, gongs and healing voice with the wonderful Jacomina Kistemaker in her sound centre in northern Spain. Then further with the masters of gongs, Don Conreaux and Aidan McIntyre in the UK. My sound journey took its course and I continue to travel on it. On my way I discovered my voice and began to integrate it into my being. An incredible transformation that is still going on and it sometimes leads to deep emotional reactions. The voice is our own instrument of healing! Here I am, blessed to now being able to share the powerful healing sounds of these archaic instruments with others during sound baths, yoga retreats and in one-to-one private sessions.

The magic of gongs and how sound healing works

Although I love playing many of these instruments, my favourite instrument is the gong. Gongs are extremely powerful and you don’t play the gong – the gong plays you. Gongs originate from Southeast Asia and were historically used in temple rituals. The feedback or resonance that a gong gives back from an impulse of a player can be much more unexpected than with any other instrument and it always contains a moment of surprise. Sometimes it’s magic, sometimes a game. It is like, “I am becoming the gong, the gong is becoming me.” It takes time and sensitivity to get to know a specific gong and establish a relationship with it. In the richness of its possibilities of expression and its plentitude of frequencies, the gong unites all other archaic instruments. In turn its effects are truly diverse.

While the experience of listening to or playing a gong is very personal and its effects unpredictable, we can however measure the frequencies of brainwaves and the effect sound has on our brain activity. For example, during a demanding activity with high information flow, the brainwave frequency is around 40Hz (called Gamma state). When awake with attention directed to the outside world, the frequency is between 12 to 18Hz (Beta), depending on the degree of our alertness. From 8 to 12Hz (Alpha), we are relaxed and our attention is directed inwards, for example during meditation. When the frequency of our brainwaves goes down to between 3 and 8Hz (Theta), we feel deeply relaxed, deep meditation or on the verge of falling asleep. Then finally from 0.1 to 3.0Hz (Delta), we are deeply asleep. The gong, rich with frequencies and harmonics, has an immediate effect on the frequency of our brainwaves and normally slows them down so that we can move effortlessly to a more relaxed state. The heart rate and breathing rhythm slow, blood pressure drops. The wonderful thing is that you don’t have to learn anything in order to benefit from a sound bath or a private sound healing session. Curiosity and openness to receive are the only requisites.

See if you can find sound healing practitioners in your area or join one of my events when you are in Andalusia to try out this magical way of relaxation.

Claudia Wiens is a yoga and meditation teacher, a Reiki practitioner, photographer and facilitates sound healing. She began her personal yoga and meditation path back in 2003. In the following years she completed several trainings in hatha, vinyasa and restorative yoga. Her interest in sound healing began in 2013, and after incorporating the use of Tibetan singing bowls in her yoga classes for quite a while, she undertook three trainings with Jacomina Kistemaker at the Punta de Couso Centre in Galicia, Spain, since 2017. She also completed the Gong Master Training with Don Conreaux and Aiday McIntyre in the UK. She lives in Seville, Spain, where she teaches yoga and spreads healing sounds during gong baths, private sessions and retreats. www.everydaysustainable.org 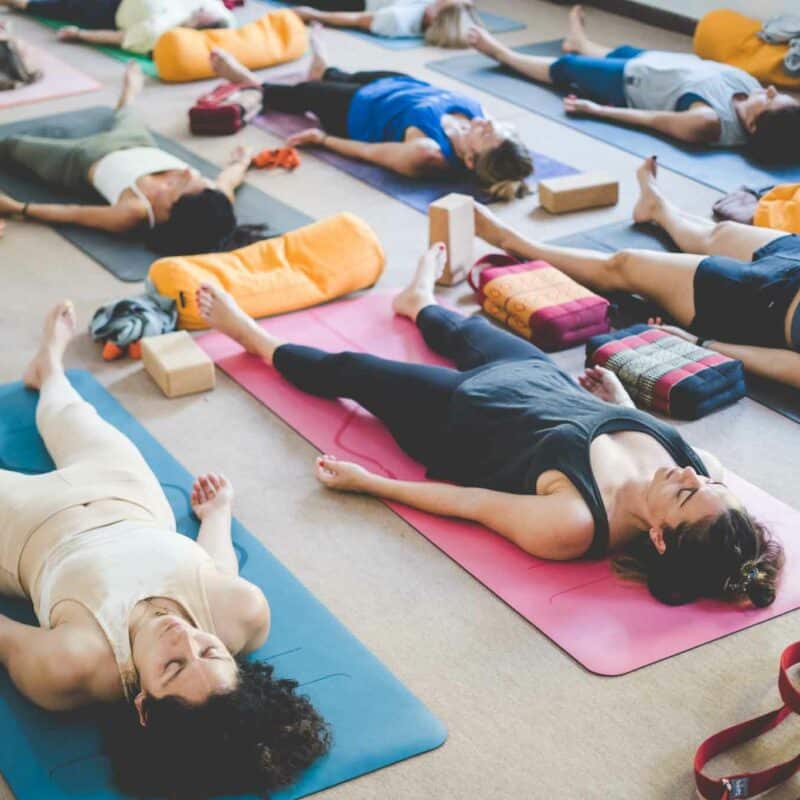 How can Hormone Yoga Therapy support you 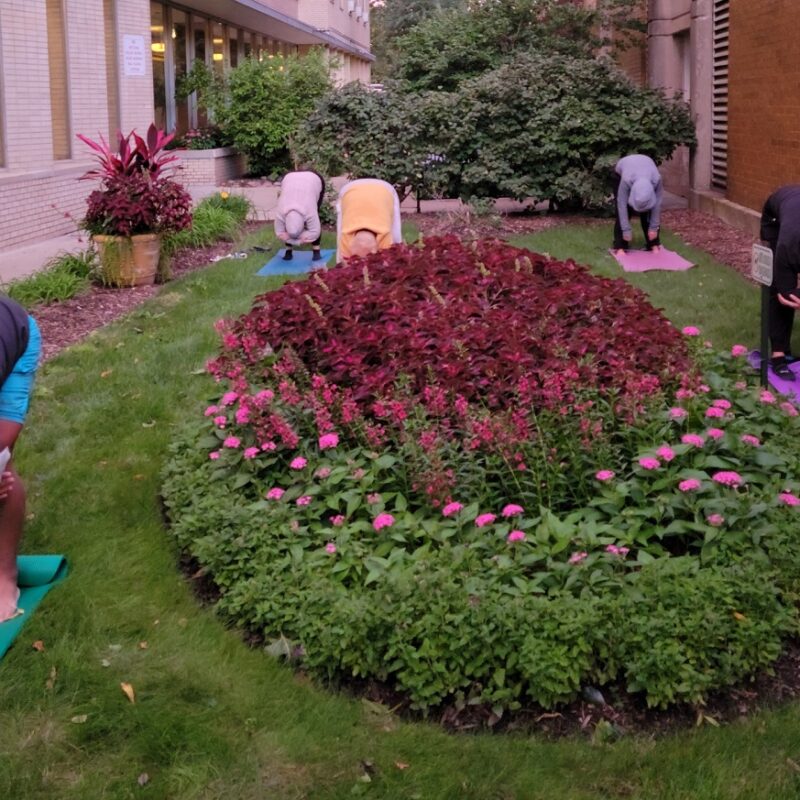 Restorative Yoga, the Parasympathetic Nervous System and You